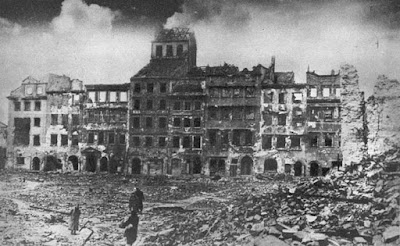 Jews were invited to Poland in the Middle Ages, when they were persecuted in the most of Western Europe, they even got special rights, which other people didn't have, sure that wasn't pure love, but Poland was losing many people in countless wars, so simply needed more people, but anyway facts matter. Without that Jews If survived would be something like native Americans today.

It got worse in 19th century, when Poland lost independence and Poles realized that minorities, especially Jews didn't really care about that. That's when the whole Polish nationalism was born, before people in Poland were first of all divided into noblemen and peasants, not into nationalities. Jews not only weren't patriotic, usually they didn't even bother to learn the language and assimilate.

During WW2 not so many people were helping Jews, but very few collaborated (Poland was the only country without collaboration government or any other serious collaboration forces) and most were just trying to survive, 3 million Polish "goys" (non Jews) were killed and they couldn't help themselves, so how they could help someone else ?

If you ask If there was anti-Semitism in Poland, the answer can't be other than yes, but Poland and Poles generally did more good than bad for Jews and anti-Semitism in 19th and early 20th century was maybe not justified but let's say not surprising in that situation.

Unfortunately many Jews (especially American) today is spreading anti-Polish propaganda, which especially in case of WW2 and a country, which lost the most and a nation, which suffered less than only Jews and Gypsies is shocking and simply disgusting.

Let's take a look at this from your first post:
"Post war only 4 of the 700 survived. He returns to his home after the war to find it occupied by 3 families who denied him access and berated him for wanting it back."

For a western reader, who has little idea about situation in Poland during and after WW2 that's of course "Polish anti-Semitism", the author knows that, so of course he "forgot" to add that about 50% of buildings in Poland were destroyed or seriously damaged (in Warsaw over 90%), so people were moving to whatever was still standing. What these 3 families should have done ? Got frozen looking at the empty house, whose owners were probably dead ? Or take their children and leave to the forest, when Mr. owner came back and wanted to have a large house only for himself ?
Posted by Unknown at 11:01 AM